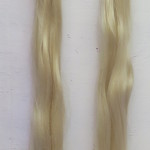 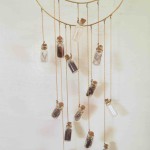 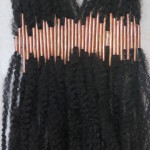 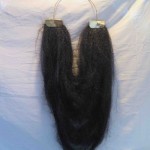 The Hair Project  is a way to research what hair styles can reveal about society and culture, religion, gender, politics. It consists of 3 interacting parts.

• ornaments  including both natural hair and artificial hair, combined with metal. In this way hair is turned into a new type of adornment 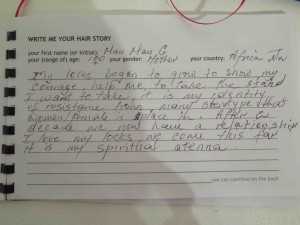 • a collection of “Hair Stories” (click), from Jamaica and abroad (stories about memories linked to hair, about the different ways to dress hair, about reactions people get on their hair style, about what hair symbolises, about what is socially and/or culturally acceptable or not, about eventual traditions or beliefs related to hair, any other stories about hair or loss of hair …)  to participate click here and to read some already collected it’s here in english and here in french. 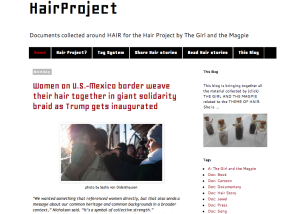 A work in progress version of the project was shown  for the first time during KOTE 2016 and then at the Jamaica Biennial 2017 (more pictures of the Hair installation here).

See below why a project about hair. 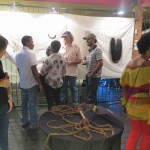 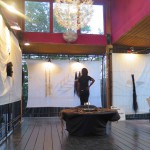 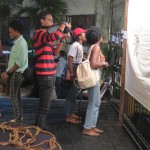 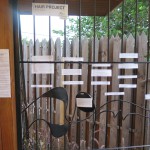 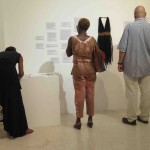 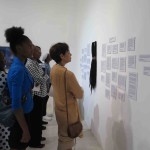 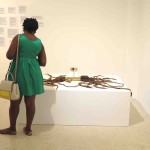 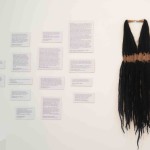 WHY A PROJECT ABOUT HAIR?

When traveling, and more specifically when traveling with my partner (a white male with long blonde-red dreadlocks), I realize how profoundly hair and hairdressing can speak about culture and society, ways of living, ways of thinking, about religion, about gender.

Whereas my hair (classic european long natural hair) can provoke sometimes reactions in some parts of the world (people touching it, asking me if it’s mine, mentioning the fact that some of it is turning white), my partner’s hair nearly always provokes reactions, wherever we are, even in our home country (Belgium).

From simple curiosity (which can go quite far sometimes: in Cuba, a woman set up a whole scheme trying to take a picture of herself with my partner, without him being aware of it) over fear and near panic (in Burkina Faso, at a time where he loosened his hair, some people got very frightened), to straight rejection (in Turkey a number of men came to explain, repeatedly and not always very kindly, that men really couldn’t not wear long hair). Here in Jamaica, where people in the street are called by their most visible characteristic, I’m called  « Whitie », whereas my partner is called « Rasta », his hair (and what it could mean here) apparently being a more important trait than his skin color.

In Jamaica there is a very broad spectrum of possibilities for wearing your hair, specifically for women: natural hair, braids (an art form by itself), relaxed hair, extensions, wigs, dreads, … History, culture, religion, external influences, and sometimes politics, all of it is worn on people’s heads.

Here, like everywhere else in the African diaspora, slaves’ heads were shaved, as part of a strategy to remove all signs of personal identity (hairstyles spoke about the slaves’ ethnic origins, social status, marital status, sometimes age, ….).

Quickly, relaxed hair became a must, and soon even a social norm, which is still partly present. No need to explain where this smooth hair style everybody had to follow comes from …

In the 60s and 70s, in the United States, at the time of the struggle for civil rights, wearing natural hair became a real political gesture. However, this is far from becoming the norm.

Currently, we are witnessing here in Jamaica, as everywhere else in the African diaspora and in Africa, a return to the natural (natural hair movement, naturalista, nappy hair), a movement wherein different elements can be observed. It stands for respect and assertiveness related to one’s own identity, sometimes going to more explicit support to the “new civil rights movement” actually active in the US, but it is also a part of a broader « back to nature » movement, present everywhere in the world (eating healthy and organic, using organic hygienic and cleaning products, protecting the environment).

From a jeweller’s point of view, it is hard to not consider hair, it still being the first ornament of both woman and man. Hair has always been both an ornamental object by itself, as well as a basic material used in finery. This is true for all times, in societies as diverse as the Bororo of Brazil or the Victorian English society.